Do you know the most common injuries in swimming? 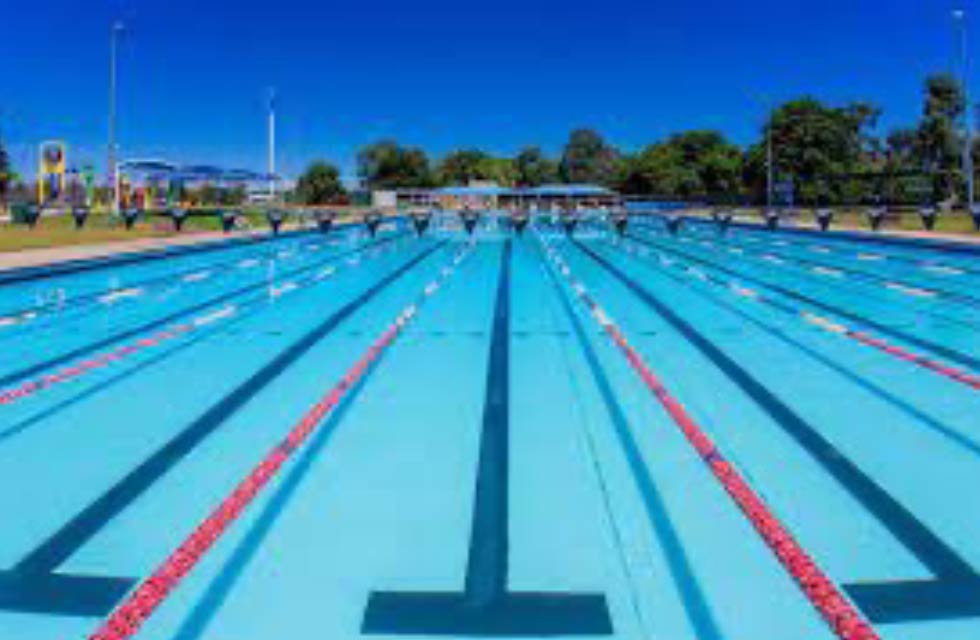 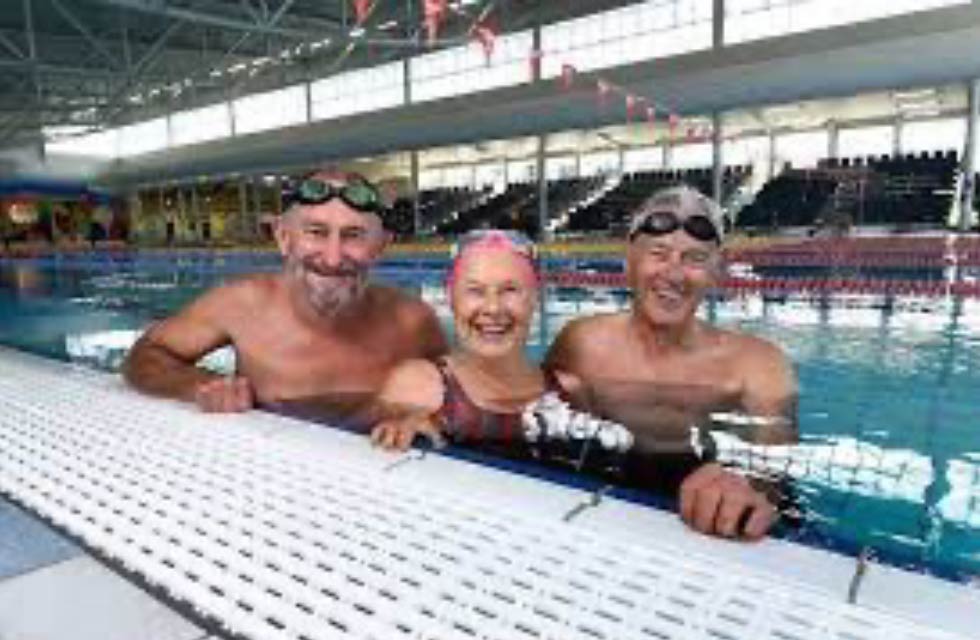 The Masters Swimming Australia National Championships were held April 20-24th at the Sydney Olympic Park Aquatic Centre this year. There are many Masters Swimming clubs around Australia, including a club in Ballarat. The Ballarat Masters Swimming club includes several members from the medical fraternity who swim regularly on Tuesday, Thursday, and Saturday each week. The President of the club is Dr Greg Hughes, Anaesthetist, and part of the Anaesthetic Group of Ballarat, with which BallaratOSM has a close working relationship. In addition, Dr Andrew Lowe, General Surgeon, specializing in upper gastrointestinal surgery and biliary and pancreatic surgery, Alicia Concannon, Medical Radiation Scientist, and our own Practice Manager, and Medical Scientist, Adrian Warmington. Programs in Ballarat are designed by a club member from Daylesford and former Canadian Olympic swimmer Tim Bach.
But as the name suggests, Masters swimmers are prone to injury. Swimming involves both explosive short distance sprinting and longer distance repetitive motion swimming. Different strokes involve a range of dynamic movements and use of a range of muscle groups.

The Ballarat Sports Medicine and BallaratOSM teams are always available to assess, diagnose and treat your injuries. Contact us to see our Physiotherapist, Sport & Exercise Medicine physicians, Rehabilitation Physician and Orthopaedic Surgeons. 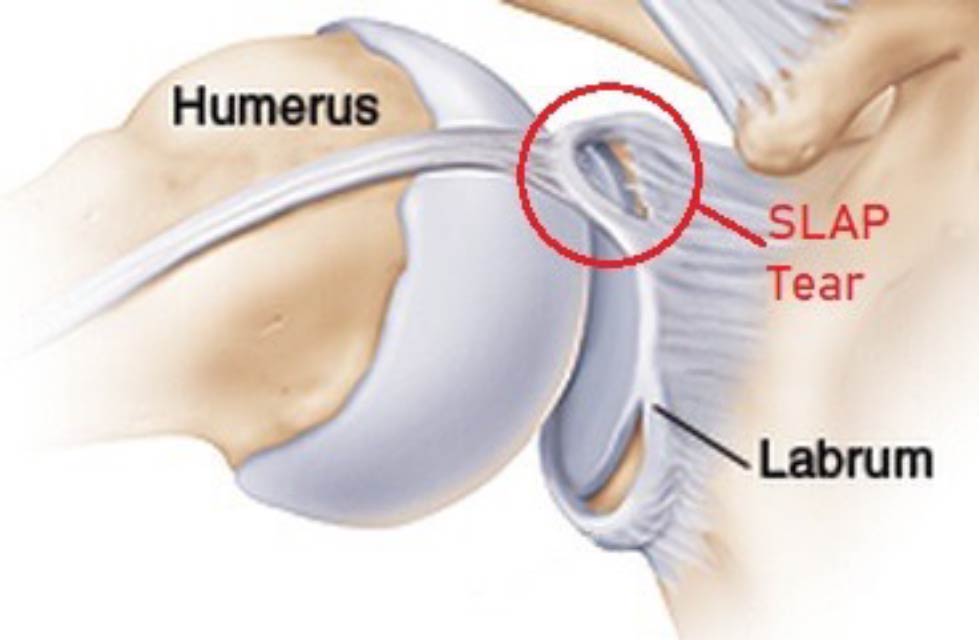 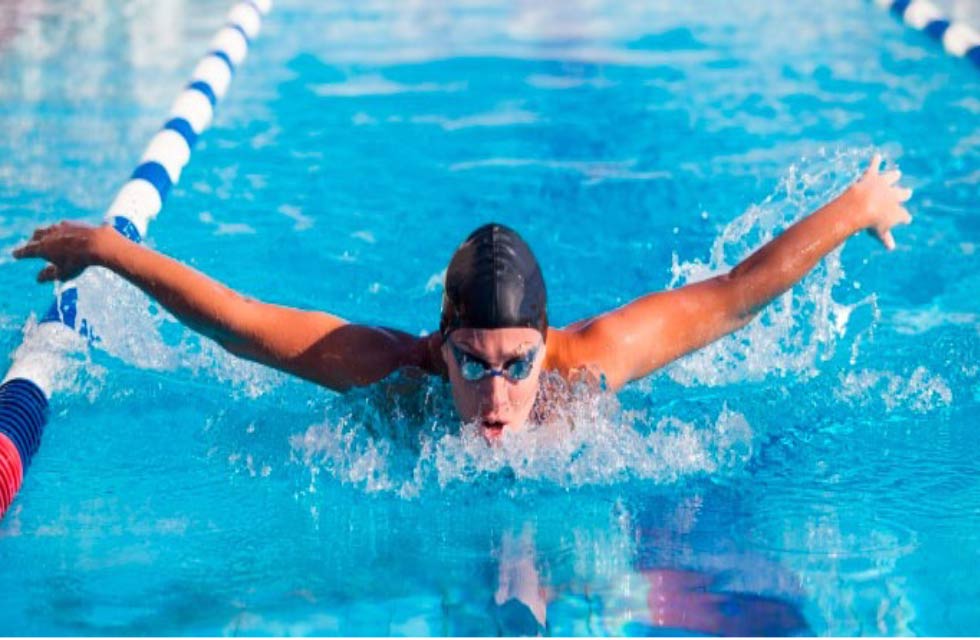 The glenoid labrum is a cartilaginous rim that stabilizes and protects the shoulder joint. Labrum injuries often occur in throwing sports and sports where the arm is frequently raised above shoulder height such as swimming and in particular butterfly.

The labrum is located where the upper arm attaches to the shoulder blade. It surrounds the head of the upper arm and thereby increases the stability of this joint during shoulder movements. The most common labrum injury is called a SLAP lesion. It occurs in the upper part of the cartilaginous rim, where the biceps tendon attaches.
The labrum can be damaged as a result of an acute injury and also as a result of an overuse injury from repeatedly performing a throwing movement with high forces. As such, SLAP lesions are common in throwing sports like water polo, where the arm is frequently used above shoulder height.

A common symptom of a SLAP lesion is pain in the upper or back part of the shoulder. The shoulder can also feel unstable, and there might be a sensation of “catching” or “clicking” in the joint.

The first step in treatment will always be a rehabilitation period of at least 3 to 6 months with guidance from a physiotherapist or Sport & Exercise Medicine physician. If there is no improvement during this time, surgery may be considered. The surgeon will often determine how much the injured person should be allowed to move their shoulder once the surgery is completed. It is important to follow these restrictions as it allows healing to take place.
Between 80 to 100% of athletes return to sport following surgery, but only 50 to 60% of these can perform at the same level as before.

In the first phase following surgery and until the injured area has fully healed, it should be kept immobile. This usually takes up to 6 weeks.

During rehabilitation, it is important to train:

It takes on average 11 to 13 months before an athlete can return to sport. All measures to restore normal strength and control should be taken before the athlete’s return to sport.

Impingement of the rotator cuff 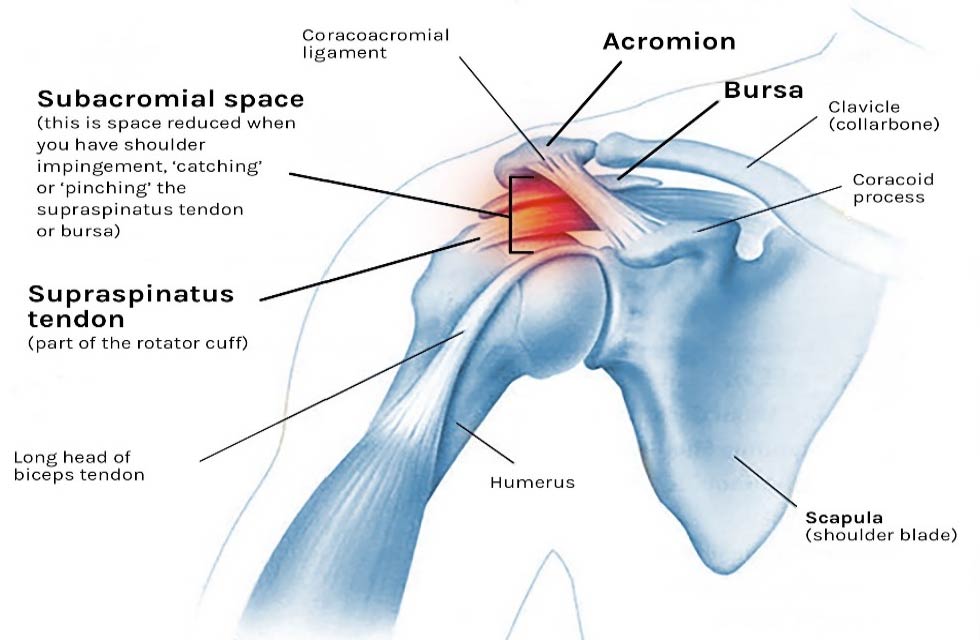 The rotator cuff is a term for the muscles around the shoulder blade. Shoulder impingement is a very common cause of shoulder pain in athletes it is considered an overuse injury.

Shoulder overuse injuries in athletes often occur when they perform many repeated movements. The tendons of the muscles can also be injured if they become impinged between bones in the shoulder joint during certain movements, such as throwing.

Injury to rotator cuff tendons usually happens gradually. In the early stages, pain can actually be felt without the occurrence of any structural damage. In later stages the tendon tissue can become weaker. This is known as tendinosis, and it can ultimately result in the partial or complete rupture (tearing) of the tendon.
Tendinosis of the rotator cuff is very common among athletes in sports that involve a lot of movement with the arms raised above shoulder height such as swimming. This activity places extreme demands on the shoulder.

Impingement is one of the most common causes of shoulder pain in the rotator cuff. It results from a tendon becoming pinched between the upper arm and the shoulder blade (scapula) in certain positions when the arm is raised.

Subacromial impingement occurs in the so-called subacromial space between the head of the upper arm and the top of the shoulder blade where they make up the shoulder joint. The supraspinatus tendon (one of the rotator cuff muscles) is most often affected. In addition, other structures such as a fat pad (subacromial bursa) can also be affected. Given that several structures can be involved, we often refer to this as impingement syndrome.
Subacromial impingement syndrome can be caused by variations in shoulder anatomy, muscle tightness, a stretched joint capsule or due to a lack of stability from the muscles around the shoulder blade. A common and effective way to treat this is to use an individualized training program. If conservative treatment fails, surgery can be performed to increase the subacromial space. Subacromial impingement is most common among people aged above 45, but it can also occur in younger athletes.

Posterior impingement can be caused by a lack of control and stability of the shoulder blade. Poor swimming technique during strokes such as butterfly and backstroke increase the risk of posterior impringement.

The first step in treatment for almost all injuries of the rotator cuff is an individualized rehabilitation program. During rehabilitation, the athlete should be removed from the activity or sport that caused the injury. A physiotherapist or Sport & Exercise Medicine physician should supervise the program and focus should be on specific factors such as:

It is imperative that the load and demands on the shoulder are increased gradually so that the athlete can fully participate in the sport without experiencing pain. This approach is successful in the majority of cases, even when there is considerable structural damage to the tendon, such as with a full thickness tear. It often takes up to 6 months of rehabilitation before any significant improvements are noticeable.

If conservative treatment is unsuccessful, surgery should be considered. However, surgery should not be viewed as a quick-fix solution. Recent research shows that around 25% of athletes in throwing sports don’t return to sport following surgery to the rotator cuff, and only a small percentage of those who do return manage to do so at their pre-injury level of performance. Also, rehabilitation following surgery takes a long time. The average duration for a return to sport is 12 months. 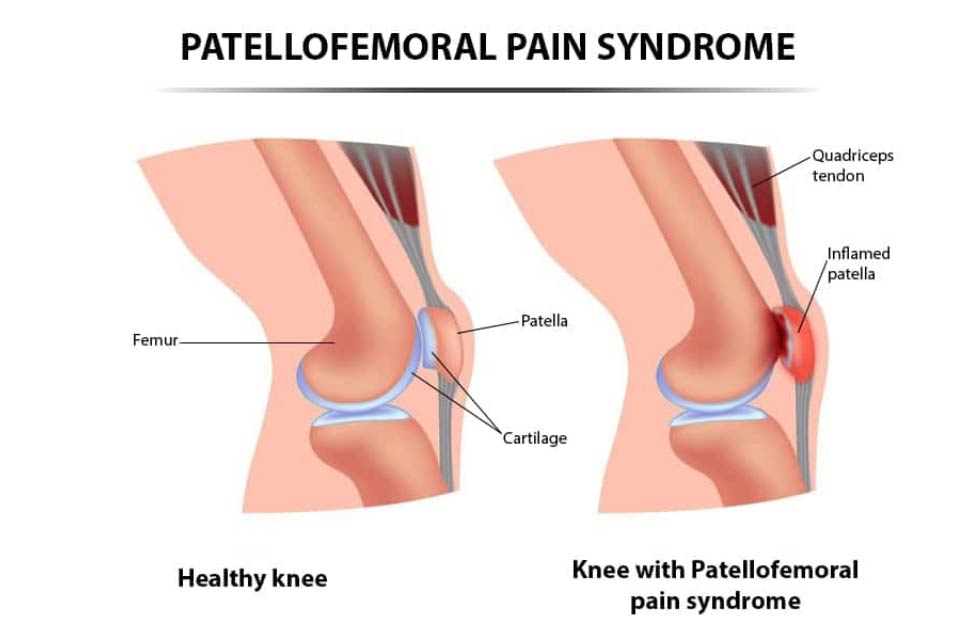 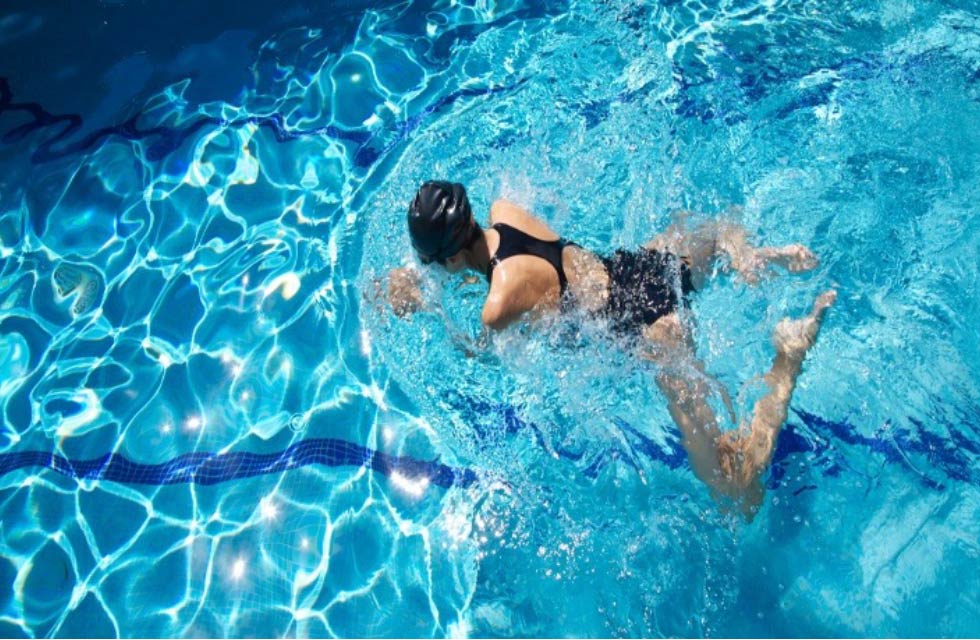 This condition is characterized by diffuse pain in and around the kneecap without a specific cause.

Studies have shown that around 50% of non-specific knee pain (pain of unknown cause) may be due to patellofemoral pain syndrome (PFPS). PFPS is not uncommon particularly in breaststroke swimmers. The amount of pain directly correlates with the number of years of training, amount of training, skill level and age.
PFPS may be caused by several factors, and with athletes it can be related to excessive overload.

The most common symptom is a diffuse pain in and around the kneecap without having an injury. The pain is aggravated by using stairs (especially going down), squatting, cycling, and with prolonged sitting. It is uncommon for the knee to lock-up or give-way, as is common with other knee injuries and conditions. The knee may feel stiff, even though it still has normal flexibility. Noises from your knee are common and not a sign of damage.

A doctor, Sport & Exercise Medicine physician or a physiotherapist will take your medical history and conduct a physical examination to confirm the diagnosis. X-ray and MRI images are often normal and are therefore of limited use.

We do not know exactly what causes PFPS. Some anatomical and biomechanical factors have been suggested as risk factors for developing the condition. Examples include overpronation (when the foot lands on outside of the heel and rolls inward), reduced strength and hip control. It is also likely that the training volume and intensity may play an important role. When anatomical factors are combined with overuse, there may be a risk of developing PFPS.

Gender is also considered a risk factor; female athletes have 1.5 – 3 times higher occurrence of PFPS than their male counterparts.

The treatment of PFPS requires a holistic approach that considers all the potential factors that might have caused the condition. For some it might be appropriate to focus on strength, mobility or muscle control. This is usually done with a structured training program. It is advised to consult a physiotherapist or Sport & Exercise physician who has expertise in dealing with this condition.

Load management is one of the most important aspects of effective treatment and the athlete’s total training load should be summarized and evaluated. It is often necessary to reduce the amount of pain provoking activities for a short period. Using orthotics (knee braces) and tape may reduce symptoms, but often temporarily. They can, therefore, be used as part of the overall treatment strategy. The return to sport should be gradual and well structured. Good communication and collaboration with the coach are recommended throughout the rehabilitation.